Answering the call with compassion 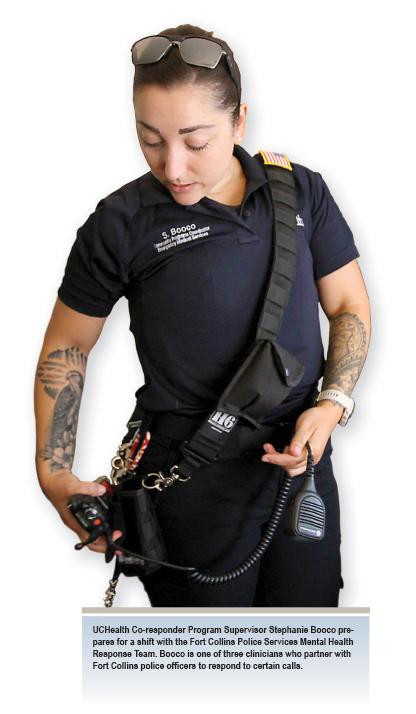 On a chilly Saturday night, the Fort Collins police respond to a home where a man hit his girlfriend several times and is now barricaded in a car threatening to harm himself. Rather than force him out, mental health specialist Stephanie Booco stands by the car window calmly talking to the man. Eventually, he steps outside and cooperates with officers.

A situation that could have led to violence and injuries instead ended in everyone leaving the scene safely. That is one of the main goals of the Fort Collins Police Services Mental Health Response Team (MHRT), which matches UCHealth crisis-trained clinicians like Booco with police officers to answer emergency and non-emergency calls where someone may be suicidal, behaving erratically, or a victim in need of support. They are often on the scene of domestic violence, harassment due to paranoia or delusions, substance use, a disturbed youth, or a person struggling with homelessness.

“Police interact with people in our community who have extreme needs,” Booco says. “In the co-responder model, clinicians work in tandem with officers to de-escalate situations and calm people down. In fact, 95 percent of our calls are stabilized in place—no transport to jail or the hospital for psychiatric care is needed.”

Booco, a licensed mental health and addiction counselor, is the program supervisor for the UCHealth Co-responder Program. The goals of a co-responder program are to:

The mental health co-responder model is being adopted in many communities in northern Colorado—and across the country—to address a growing mental health crisis amplified by the COVID-19 pandemic and a lack of adequate mental health and substance use resources. In 2020, the National Alliance on Mental Illness (NAMI) reported 1 in 5 U.S. adults has mental health concerns, and 1 in 20 has a serious mental health disorder.

The need for the service has been so great that the team needed to grow. “When we began this program, we learned that there is no way that the MHRT can respond to every mental health-related call, there are simply too many,” says Fort Collins Police Officer Annie Hill, a team member who is also a psychotherapist and certified addiction counselor.

Last year, two Fort Collins co-responder units answered 1,892 calls for service. A third officer and clinician were added this year, and there are currently openings for a fourth unit so that the Mental Health Response Team can be available 7:30 a.m. to midnight, 7 days a week. Officers are carefully selected and receive extensive training before joining the unit.

Funding for the MHRT is split between the police department, which covers the cost of all equipment and patrol cars, and UCHealth, which employs the clinicians.

Mental health crisis intervention is becoming a priority in northern Colorado. In addition to the MHRT, SummitStone Health Partners’ Co-Responder Program partners with the Larimer County Sheriff’s Office, and the Loveland and Estes Park police departments to provide clinicians that assist on behavioral health calls.

The sheriff’s department program is made up of three clinicians, two deputies, and a supervisor. Units respond to calls throughout the county including in Red Feather Lakes, Poudre Canyon, Rist Canyon, and unincorporated areas. Between December 2021 and January 2022 they handled 185 of the 299 mental health-related calls that dispatch received, not counting welfare checks.

Elsewhere, North Range Behavioral Health in Greeley partners with police departments in Windsor and some other towns in Weld County to provide clinician co-responders. 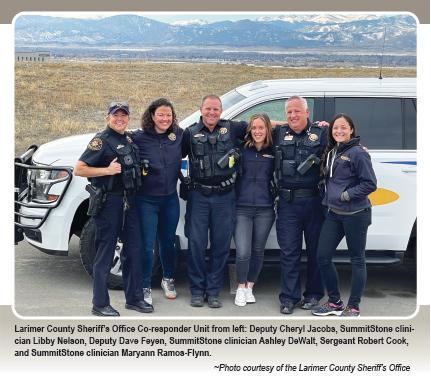 ven if police need to make an arrest and charges are filed, a person’s mental health and/or substance use issues may be considered. There are options for receiving treatment and repairing harm as an alternative to jail or prison for those who qualify.

The Alternatives to Incarceration for Individuals with Mental health needs (AIIM) program provides comprehensive mental health and substance use treatment services and criminal justice supervision for some crimes.

In the 8th Judicial District Wellness Court, which includes Larimer and Jackson counties, a person facing a misdemeanor, felony, or revocation of probation can agree to a treatment plan from a judge and follow the rules of probation supervision. Even for those who complete these programs, though, the charges remain on their record.

But thanks mainly to Hill, the Fort Collins officer, there is now a third option. She pushed hard for a new Mental Health Diversion Program that was launched in 2021 to provide behavioral health help for adults arrested for minor offenses in Larimer and Jackson counties. The person who is charged gets a full evaluation and treatment recommendation, which is considered the same as a fine or community service. If they stick with the program and complete it, their charges are dropped.

“You can tell when giving someone something extra to pile on is not going to help that person,” Hill says. “They are struggling. Going to jail isn’t going to allow them to make a change or get better.”

As of March, 26 people have completed Mental Health Diversion and 112 have been referred. After seeing the results, substance use is now being added to the program to give people a chance to deal with their addiction without being locked up.

Sergeant Robert Cook, who supervises co-responders for the sheriff’s office, has seen the difference that understanding, and a little compassion, can make when a person’s mental state is impacting their actions.

“There are so many success stories about people we have assisted who, once connected to the necessary resources, stabilize and can not only function as a member of society again, but also begin to thrive.”