Home > Will you carry naloxone?

Will you carry naloxone?

Opioid antidote can save lives

Jess Fear is never without a dose of naloxone, a medication that can reverse the effects of an opioid drug overdose. She’s not a paramedic or a nurse, and she doesn’t struggle with substance use. Fear is a member of the Naloxone Champions, a group that trains and educates members of the public and community providers who work with substance users on how to administer the life-saving treatment to a loved one or a stranger.

The opioid epidemic has led to a staggering number of deaths in the U.S. In  Colorado, an estimated 960 overdose deaths were recorded last year. In Larimer County, nearly half of the 53 overdose deaths were primarily caused by opiates, while 76 percent of those who died by suicide had drugs and/or alcohol in their body, according to the county coroner’s report. The U.S. Surgeon General issued a public health advisory urging more Americans to carry and learn to use naloxone, an antidote to opioid overdose. Opioids is a term for drugs that bind to opioid receptors in the body. They include illegal drugs like heroin, and pain relievers available legally by prescription, such as oxycodone, codeine, morphine, Percocet, and the synthetic opioid fentanyl—drugs that are sometimes sold and used illegally.

The reality is that almost anyone can overdose—you don’t have to be taking illegal drugs. “It’s possible to overdose on opioid pain medications that are legally prescribed by a doctor,” says Fear, the behavioral health strategy and project implementation manager for the Health District of Northern Larimer County’s Community Impact Team. “If your teenager gets into your medicine cabinet and takes some of your prescription pills, they can OD whether they are regular drug users or not.”

So what is an opioid overdose exactly? Opiates bind to receptors in the brain and impact the central nervous system; too much can slow down a person’s respiratory rate until they can’t breathe. When breathing stops, the heart stops—that’s an overdose. Naloxone, also known by the brand name Narcan, works by kicking the opiate off the brain receptor and temporarily reversing the impact of respiratory failure. (See graphic for signs of an overdose.)

The way opiates work on the brain makes it easy to get addicted. The good news is that addiction is treatable. As Fear says, “I want people to understand that substance use treatment works and recovery is possible. Naloxone is an essential tool in that struggle, because people can’t recover if they are dead.”

Naloxone comes in a nasal spray or an injectable. In addition to local community trainings, there are also YouTube videos on how to administer the medicine. Its side effects are minimal—headache, dizziness—and it does no harm if given to someone who hasn’t overdosed on narcotics. It can be safely used on all ages and on pets. 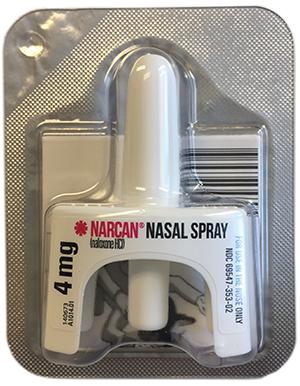 It is critical to call 911 immediately in an overdose situation, then administer naloxone, so the person suffering from an opioid overdose has a chance to survive until emergency medical personnel arrive. Naloxone acts within minutes, but its effects last only 45 minutes or an hour.

Any adult in Colorado can buy naloxone at a pharmacy because the state has a standing order for the drug, which means you don’t need a prescription to purchase it. Generic naloxone spray costs around $20 to $40 per dose, while Narcan is about $130 to $140 for a kit that includes two doses. Over 200 pharmacies in the state currently carry it, including many in Fort Collins.

So, will you carry naloxone?