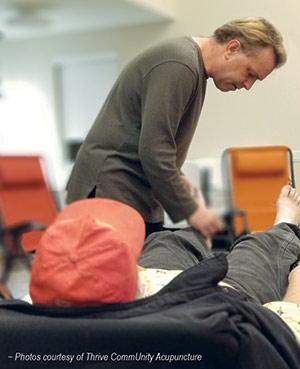 The 2,500-year-old Asian practice of acupuncture is one of the most time-tested methods for regaining balance, strength, and healing in the body, and recent research has shown that it can help ease chronic pain, nausea, migraines, anxiety, and other health conditions. In fact, many doctors and patients in the United States have begun embracing acupuncture as a non-opioid treatment for pain.

Dee Gorski, who practices at Thrive CommUnity Acupuncture in Fort Collins, says it’s gratifying to see acupuncture relieve pain in patients who may have tried everything else, to no avail. “I worked with someone who was really struggling with ongoing lower back pain that affected his ability to walk. He was living a sedentary lifestyle because of his pain. But after two weeks of acupuncture, he stopped using his cane, and said his pain level went down from an 8 or 9 to a 1 or 2. Now he is more active, goes hiking, and has lost weight.”

Acupuncture works by applying needles, heat, and/or pressure to specific points on the body. Because many opioid addictions begin with people desperate for pain relief, acupuncture is increasingly seen as a way to avoid the use of highly addictive pain pills in the first place. “The opioid crisis has fueled a reliance on acupuncture in this country because it helps patients improve pain management,” Gorski says. 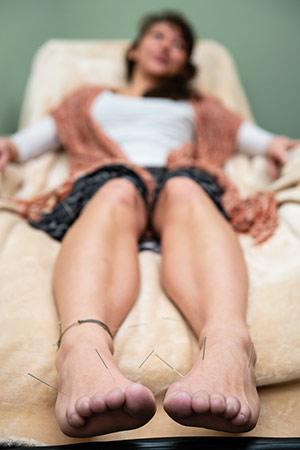 A typical visit to Gorski’s office might begin with an examination of your tongue, taking your pulse, and a discussion of your overall health and symptoms, she says. Then, you will either sit in a chair or lie on a massage table and fine needles are inserted into specific points in your body that fall on certain pathways called meridians, according to Chinese medicine.

“Once the needles are inserted, patients will then sit quietly for about 30 minutes. If someone is experiencing a migraine, I encourage them to take as much time as they need. Acupuncture can help migraine pain go from mind-numbing throbbing to very mild throbbing. Then, if patients can go home and get a nap after acupuncture, it can completely relieve their migraine pain.”

A license is required to perform acupuncture in Colorado. The Acupuncture Association of Colorado lists licensed acupuncturists at acucol.com and you can check that a provider's license is in good standing at colorado.gov/dora.

Research is still emerging on exactly why acupuncture is effective. Traditional explanation holds that this stimulation releases and unblocks energy, or "qi" (pronounced "chee"), that may be causing imbalances and restores the body’s natural balance. Another theory is that acupuncture may relieve pain by releasing endorphins, the body's natural pain-killing chemicals, and by affecting the part of the brain that governs serotonin, a brain chemical involved with mood.

Some researchers believe acupuncture may change cells in connective tissue around the pressure points in lasting ways that lead to less pain. There is also evidence, according to a 2016 study, that stimulating the vagus nerve, which runs from the brain stem to the colon, may lower inflammation throughout the body.

Acupuncture has become so commonly accepted that the World Health Organization now recognizes its effectiveness in treating more than 60 conditions including high blood pressure, irritable bowel syndrome, depression, colds, and infertility. Many illnesses, such as anxiety, are linked to higher rates of inflammation, and acupuncture reduces that inflammation and can settle the nervous system, Gorski says.

She notes that cancer patients undergoing chemotherapy have found that acupuncture can trigger their lymphatic system to move toxins out of the body. “Many people are often depleted by their second week of chemo, so we use acupuncture ideally two to three times a week for several weeks to help them get their energy back.”

The U.S. Department of Veterans Affairs and the Department of Defense are training their medical providers in simple acupuncture techniques for pain control, and several VA and military medical facilities offer treatments. Some private insurance companies have also added acupuncture as a covered benefit.